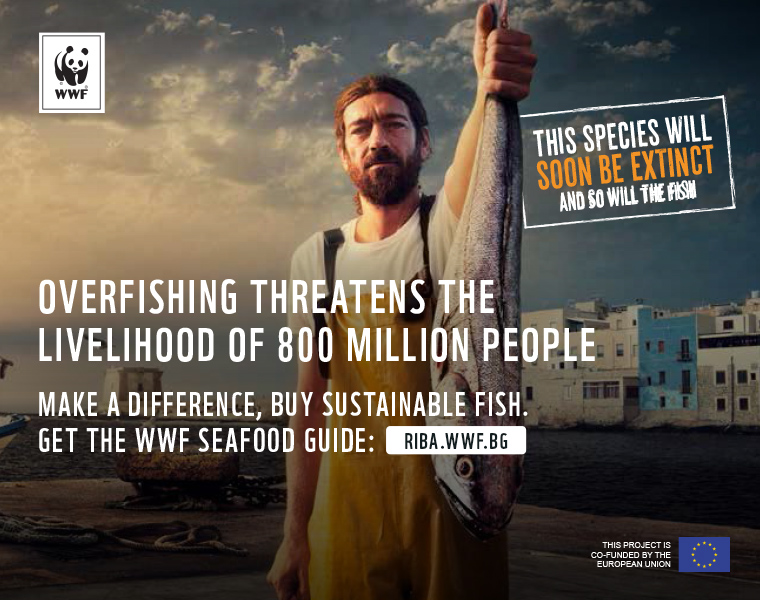 The international conservation organization WWF (World Wildlife Fund) is coming to Veliko Tarnovo from November 4th to November 20th at the invitation of the Mall Veliko Tarnovo. The initiative is part of a large-scale European campaign to protect wildlife in the ocean and livelihoods of people who rely on fishing. As part of the campaign, WWF is making consumers aware of the enormous importance of choosing sustainable marine products.

On the ground floor of the shopping center playing games, you will receive valuable consumer advices, thanks to the unique interactive installation – Freezer, designed to simulate the purchase of seafood in the fish shop. WWF’s experts will surprise you with curious details about the fish and will explain to you why it is constantly disappearing from our planet. Visitors will also receive a copy of the first ever WWF's manual seafood guidebook, small enough to be carried inside the pocket.

What threatens the ocean and fishermen?

To satisfy our hunger for seafood, today we take more fish from the oceans than they can sustainably provide. We have reached the point where marine ecosystems and many local communities are put at risk. Statistics show that the global 'production' of fish, including both aquaculture and fishing, amounts to 171 million tonnes. And 33% of the world's fish stocks are overfished. At the same time, more than 800 million people on the planet depend on seafood for their food and income.

What happens to the fish?

Overfishing is the second biggest threat to the oceans after climate change. However, as world hunger and poverty levels continue to increase, fish will be extremely important as a source of high quality protein. For this reason, we should not allow it to become extinct.

"In times of climate change, increasing global population, and high demand for fish and seafood, the shift to sustainable production and consumption is a must. Only in this way the fish will remain a valuable source of food and income in the future," says WWF Bulgaria chief  executive Vesselina Kavrakova.

What can we do?

Fish and seafood are the most traded commodities worldwide. As a result, over the last 40 years, global stocks have marked almost double decline. At the same time, the European Union is the largest seafood market on the planet, making our choice extremely important. Actually, we do not have to give up consuming fish and seafood. However, it is important to buy marine products caught or farmed in a way that conserves fishery resources and the people who depend on them.

To find out how you personally could support saving the wildlife in the ocean come to a meeting with WWF at Mall Veliko Tarnovo between 4th and 20th of November. You can learn more about WWF's campaign Fish Forward at https://www.fishforward.eu/en/