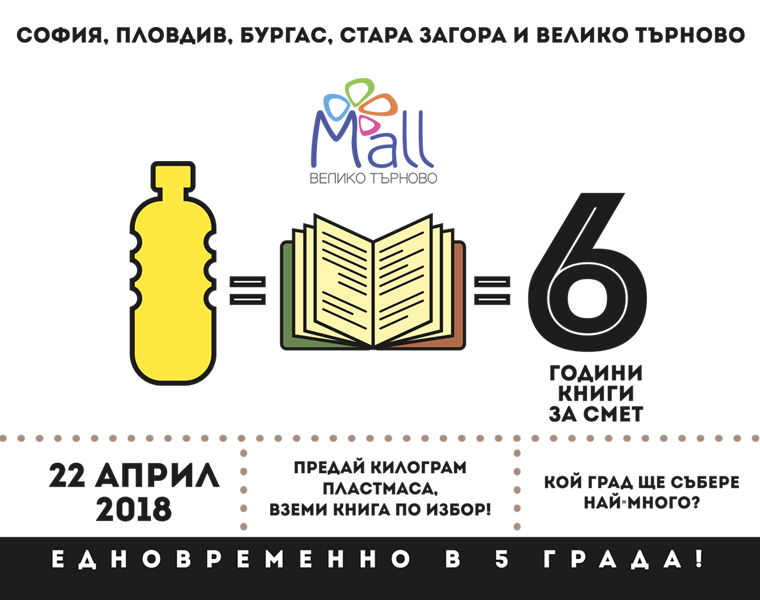 "Books for plastic" simultaneously in 5 cities on April 22

This year "Books for plastic" is back on April 22, and for the first time the eco-friendly campaign that promoting the reading will be held simultaneously in five cities across the country. These are Sofia, Plovdiv, Burgas, Stara Zagora and Veliko Tarnovo.

The campaign, that we can boldly call one of the most popular and large-scale initiative in Bulgarian this time will unite the people from the five cities in a contest where will be collected more plastic waste. Dear citizens of Veliko Tarnovo, do not be discouraged, because even though we are the smallest town in the contest, the counting will be reported per capita. We have the chance not only to have fun during the campaign, but also, after the end of the queues to be the winner of the competition.

So, let's remind the regulation - on April 22 from 10:00 to 13:00, bring one or more kilograms of plastic waste to Mall Veliko Tarnovo's southern parking lot. The waste has to be clean and suitable for recycling. For each kilogram, the participants will receive a coupon for one paper or two eBooks from the online bookstore. Each person can get maximum 2 coupons, regardless of the amount of the kilograms of the plastic waste. With this measure, the aim of the organizers is to stimulate more people to take participation in the initiative. But if we will fight for victory in the inter-city competition, as you guess, you'll have to give from yourself as much as you can.

From 2013, the beginning of the campaign, until 2017, more than 43 tons of plastic waste was recycled and thousands of books were distributed.